WRIGHT-PATTERSON AIR FORCE BASE, Ohio – Under a cooperative agreement with the University of Cincinnati, the Air Force Research Laboratory’s 711th Human Performance Wing is supporting a first-of-its-kind clinical trial involving closed-loop control of oxygenation during mechanical ventilation. In the long-term, findings from this trial could improve ventilator technology, a key tool used in the fight against COVID-19.

“For the medical community, closed-loop devices would cut down on exposure, but also maintain, if not elevate, the standard of care [provided to patients],” said Dario Rodriquez, Jr, a senior research health science officer with the 711 HPW and a registered respiratory therapist. “This technology would reduce the time healthcare workers spend with patients adjusting ventilator settings.”

While this type of mechanical ventilator is not available on the U.S. market, the technology is of great interest amid the current pandemic as hospitals treat patients with coronavirus (COVID-19), a severe respiratory illness, Rodriguez explained. With closed-loop control oxygen, automatic adjustments are quicker than manual changes. Additional benefits include reduced oxygen consumption and fewer instances of patients experiencing oxygen deficiencies.

Ventilators are machines, typically used in intensive care units and emergency rooms that move air into and out of the lungs, delivering breaths to patients who are unable to breathe sufficiently on their own.

Rodriquez, who also serves as the director of clinical research within UC’s Division of Trauma/Critical Care, said that a closed-loop system functions similarly to a thermostat, which regulates temperature by turning on the air conditioner or the heater to maintain the desired setting inside a home.

“In very simplistic terms, is probably the best way to describe how [closed-loop oxygen] works,” he said. “Closed-loop ventilators do not employ artificial intelligence. Essentially, these devices incorporate an automated rule set by [clinicians] based on the desired parameters for a patient.” The ventilator automatically adjusts the oxygen level that a patient requires based on a signal from a pulse oximeter, a finger probe that measures relevant levels in the blood.

The system works as follows: an acceptable range for the patient’s oxygen saturation is set. Then, based on a signal that the pulse oximeter gives, if the reading goes above that number, the ventilator automatically brings the oxygen level down. However, if the level falls too low, it automatically instructs the ventilator, through an algorithm, to increase oxygen.

The first trial, led by 711 HPW and UC researchers, began in 2006 and focused on the IMPACT 754 Ventilator. After acquiring IMPACT Instrumentation Inc., ZOLL Medical produced a new device, the ZOLL 731 EMV+. Rodriquez explained that the U.S. Food and Drug Administration required a new study since the technology changed.

Rodriquez said that the latest trial aims to secure enough patients to provide efficacy and safety data so that the device’s sponsor and manufacturer, ZOLL Medical, can submit the trial data to the FDA. Ultimately, this agency determines if the evidence is sufficient and decides whether the manufacturer can market this product. To date, the latest trial reached 88 percent enrollment with data collected from 184 patients.

Participating hospitals use these devices only on patients who consent to be part of the trial, which is permissible under an investigational device exemption, issued by the FDA for medical devices. As the host center, UC partnered with the University of Texas Health Science Center-Houston, Los Angeles County Medical Center, affiliated with the University of Southern California and Regions Hospital in St Paul, Minnesota.

Rodriquez explained that, “this trial is part of a larger portfolio effort, and the ultimate goal is to provide a system that’s able to make all of the parameters on the ventilator closed loop controlled.”

The research team he leads is also looking into other scientists from universities as well as companies, trying to develop a system that would allow full closed-loop oxygen control. Rodriquez revealed that two closed-loop control devices exist outside of the U.S. including a device made by a European company and one for noninvasive approaches from Canada.

AFRL’s 711 HPW has a significant and long-standing partnership with UC researchers from various disciplines and departments working together under cooperative agreements. The Department of Surgery within the UC College of Medicine oversees this particular project.

“We are truly grateful for the collaboration we have with our UC partners and our teams’ ability to advance technology in support of patient safety and improved patient outcomes,” said Col. Guy Majkowski, division chief, warfighter medical optimization, 711 HPW. He describes “military-civilian partnerships as the cornerstone of future research efforts” since they allow us to “leverage resources and capitalize on the tremendous talent that we have across our nation.” 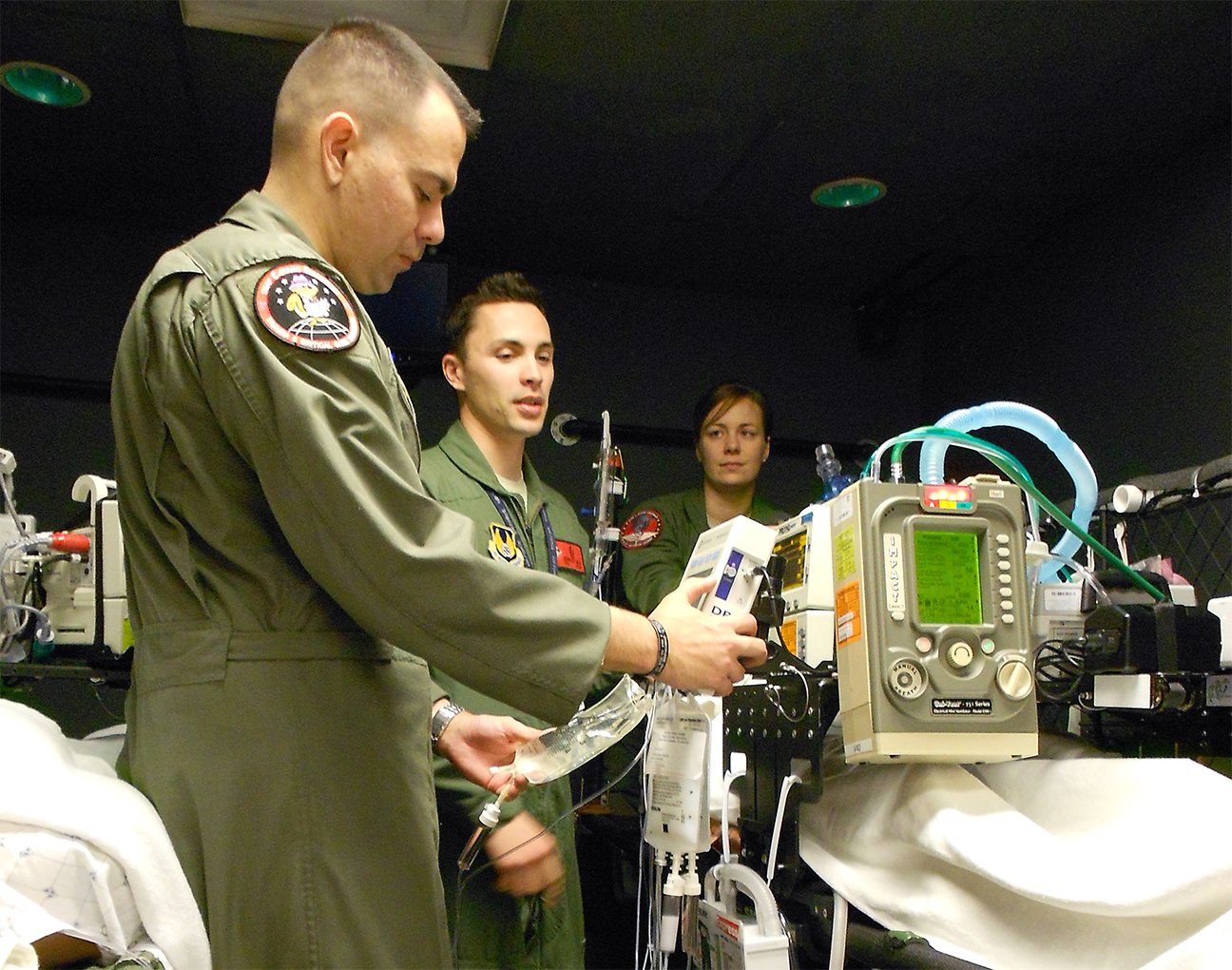 Air Force Cardiopulmonary Lab staff and CSTARS Cadre from the United States Air Force School of Aerospace Medicine (USAFSAM), at Wright-Patterson Air Force Base, including Chief Master Sgt. James Woods (forefront), Master Sgt. Jensen DeNijs (middle), and Master Sgt. Erin Seley (background) are shown evaluating a patient simulation scenario which incorporates the use of the 731 EMV+ ventilator used in their trial at the University of Cincinnati Medical Center C-STARS (Center for Sustainment of Trauma and Readiness Skills) in this July 2016 photo. C-STARS is a joint program between the University of Cincinnati Medical Center and the Air Force, offering training for military medical personnel in the areas of trauma and critical care. (U.S. Air Force photo/Dario Rodriquez)