KEESLER AIR FORCE BASE, Miss. (AFNS) — The key to finding a vaccine or effective treatment against COVID-19 may lie in its genetic code. As researchers around the globe are searching for clues to unlock the secrets of the novel coronavirus as the epidemic continues to spread worldwide, the Air Force Genetics Center of Excellence at Keesler Air Force Base is aiding in that scientific research effort to sequence the severe acute respiratory syndrome coronavirus 2 (SARS-CoV-2) genome, the virus strain that causes COVID-19.

The molecular diagnostic lab at Keesler AFB is just one of a large group of collaborators working together to decipher the SARS-CoV-2 genome. Keesler AFB has partnered with the Centers for Disease Control and Prevention, the National Institutes of Health, academic institutions, and other DoD labs, including the 711th Human Performance Wing at Wright-Patterson AFB, Ohio.

“Because we have broad expertise and capabilities when it comes to genetics testing, I volunteered our lab to take on this challenge,” said Maj. (Dr.) Mauricio De Castro, noting the benefit of being a military lab is being flexible in times of crisis.

As the reference genetic testing laboratory within the DoD, Keesler AFB knows genetic sequencing. Researchers at the lab have contributed to overall readiness efforts in testing for a wide variety of genetic markers, from rare causes of sudden cardiac death to hereditary cancers. Testing also includes pharmacogenomics, which predicts a patient’s response to drug therapy based on their genetic makeup.

“From a readiness perspective, that’s a service member who is ready earlier to go back to the fight instead of waiting two to three months to get on the right medication,” explained De Castro, director of the molecular genetics laboratory at the genetics center.

In the coming weeks, the lab plans to conduct sequencing of the SARS-CoV-2 virus obtained from positive cases. Sequencing of one viral genome takes anywhere between six to 12 hours. Data from the novel coronavirus will provide critical information to researchers as the virus continues to change over time.

A genome is a long string of information that contains the blueprint genetic material of any organism, De Castro explained. The sequencing is the process that scientists use to read the string of letters (nucleotides) within the genome to decipher patterns and mutations, or changes, within the virus over time. The SARS-CoV-2 genome has between 29,000 and 30,000 letters, according to De Castro. For reference, the human genome contains more than three billion letters.

“If you know the genomic sequence, you can know what to target for treatment, medications, vaccines, etc.,” De Castro said.

To date, scientists around the world have shared over 10,000 viral genome sequences of the novel coronavirus. As the virus continues to change and spread, sequencing more SARS-CoV-2 genomes becomes vital because the cumulative data helps researchers view the rate of change over time and track the ongoing outbreak.

Similar to pattern recognition, when comparing the genome’s letters against each other, researchers were able to draw conclusions on the most likely origins of the virus to that found in bats. They also recognized specific sequences within the virus that have remained constant, and largely free of mutations, which is vital in figuring out how to attack the virus, De Castro explained.

Parts of the genome in each organism serve such critical functions that those features seldom ever undergo significant change, De Castro said.

“If you target parts of the virus that don’t change as much, you have a much better chance of coming up with an effective treatment or vaccine. And so that’s where knowing the specific proteins, the sequence of the proteins and what they do and how they have changed, is important,” he added.

Previous research from other coronaviruses has given researchers an advantage in the race to find a vaccine for COVID-19.

“Studying closely related coronaviruses that have caused epidemics in humans before, like Severe Acute Respiratory Syndrome (SARS) in 2003 and Middle East respiratory syndrome or MERS in 2012, will aid pharmaceutical companies in more quickly developing effective vaccines,” De Castro said. “The key will be in deciphering the differences between the novel coronavirus and closely related viruses, as it appears that small changes to its genomic sequence have made it more lethal and contagious.” 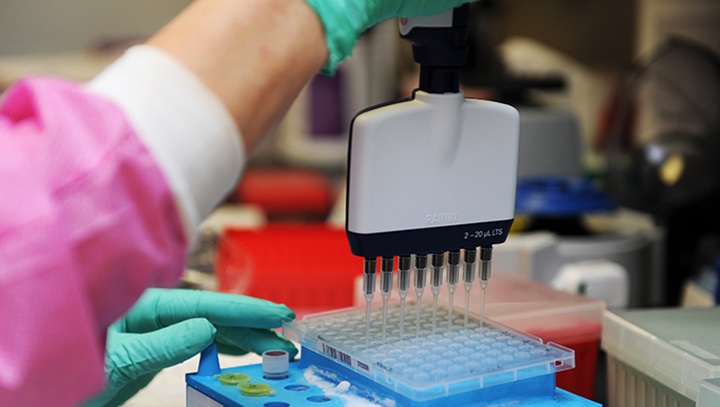 Kimberly Griffitt, 81st Medical Operations Squadron molecular technologist, uses a multi-channel pipetting technique to prepare patient DNA for testing at the 81st Medical Group’s genetics center at Keesler Air Force Base, Miss, May 7, 2020. The Air Force Medical Genetics Center is the only laboratory of its kind in the entire Defense Department. Made up of the cytogenetics and molecular genetics labs, the center is focused on providing clinical and laboratory diagnostic services to support all DoD facilities worldwide. (U.S. Air Force photo by Kemberly Groue)