The Unmanned Long-endurance Tactical Reconnaissance Aircraft (ULTRA) is an aircraft conceived by the Air Force Research Laboratory (AFRL) Center for Rapid Innovation (CRI) and developed in conjunction with DZYNE Technologies Incorporated (DZYNE). ULTRA provides combatant commanders with full global operational access in an inexpensive, GPS hardened, ultra-long endurance Intelligence, Surveillance and Reconnaissance (ISR) platform. Ultra has an endurance capability that exceeds 80 hours while carrying over 400 lb. of payload. the ULTRA system is truly unique in its ability to conquer the tyranny of distance that inhibit operational use of current unmanned platforms at excessive ranges required in areas of operations such as the Pacific. 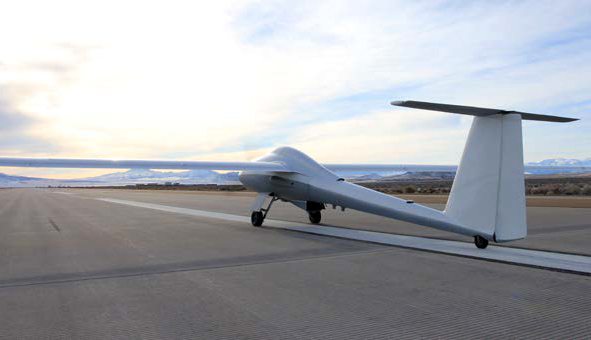 Picture of ULTRA on runway preparing for takeoff. Current upgrades will push the endurance to potentially greater than 80hrs depending on payload.

ULTRA is designed to be an ISR truck capable of carrying a variety of electro-optical/infrared (EO/IR), radiofrequency (RF), other low-cost intelligence collection payloads, and sensors to provide the user with a reconfigurable missionized platform. Exceptionally long endurance allows these ISR sensors to provide unblinking coverage of areas of interest with fewer aircraft. Furthermore, ULTRA is an economical option when multiple aircraft systems need to be purchased to cover larger areas of interest.